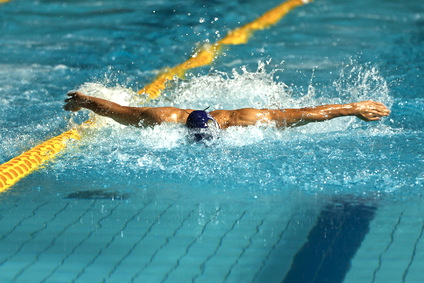 I love watching the Olympic Games. I marvel at the feats these athletes are able to accomplish. I applaud and cheer them on from my living room couch as though I was their personal coach. I hold my breath when they jump from the balance beam, fly over the high bar, run for the finish line, or stretch their fingertips to touch the pool’s edge first. And, I’d be a liar if I didn’t admit I get a lump in my throat each time I hear our national anthem play at the award ceremonies. These athletes and these Games remind us what’s possible – they remind us about striving to be the best possible version of ourselves.

The accomplishments of Michael Phelps over the last several days – indeed, the last 16 years – have been amazing. And, believe it or not, some people are still debating whether he can now be considered the best Olympic athlete ever. Really? With all due respect to the debaters, only a person who has never pursued (and achieved) a goal of excellence at least once in their life would shortchange the deserved accolades for Michael Phelps. Conversely, those who have ever committed themselves to the pursuit of excellence (in any area or focus of life) will tell you Phelps is the best – not just for the records he has broken or medals he has won, but for his personal commitment.

When Phelps was just a kid, he watched the swimmers in the 1996 Olympic Summer Games in Atlanta and dreamed of being a champion. He liked swimming; so, he decided he would be an Olympic swimming champion. From that day on, he made a commitment to be the best swimmer he could be. And then began the daily practices and countless hours in the pool. Michael swam before school and after school. He swam on Christmas, on his birthday, and all through the summer vacations when other kids his age were at the beach or the movies. Just four years later, at age 15, he competed in swimming at the Summer Olympic Games in Sydney, Australia. He didn’t medal that first time out – and he didn’t give up. (It should be noted that while it was Michael who was in the water every day and who was pushing himself hard every day, he will be the first to tell you he did not do it alone. He has expressed gratitude for his supporting family, his coach and everyone else that helped him along the way.)

The best of the best are those who block out or work through all the inevitable distractions, the discomfort, the temporary setbacks, and even a failure or two to focus on realizing their dreams. Remember: the distractions and failures are only temporary and provide valuable information – the secret is to remember your goal, re-set your focus, and try again. It takes courage to get back up or get back in the water. Everyone from around the world was watching Phelps in that first race last week when he finished fourth! But, Phelps didn’t give up; he knew in his soul what he needed to do.

Deep down in your soul you know what you need to do to be the best version of yourself. You know what you need to do each day to be the best at sales, to be the best team leader, to be the best at whatever you’ve chosen for your life. I’m currently reading an interesting book. (This book, by the way, was given to me by two different clients!) The book, Younger Next Year, Chris Crowley/Dr. Henry S. Lodge, Workman Publishing (2004), is about exercising some control over your aging process – the key words being “exercise” and “control.” These authors outline how we can control not only our physical condition as we age, but that we can actually extend our life through exercise. The two things we can’t control or change are gravity and the fact that our bodies will eventually wear out and decay with age. That’s simply the design by our Creator. However, these authors are telling me that with exercise I can add years (maybe 10 to 20) of living without the so-called normal aches and pains! Now, who wouldn’t want that? Maybe that question isn’t as pertinent to a 20-year old. But, I’m not 20 and I am asking myself this deep, soul-searching question: Why not do what I need to do to add years to my life expectancy? It is the same reason you don’t become the best version of yourself at whatever you choose. For the record, I’ve made my choice to exercise daily and go for those extra years – a choice that made me and Mary, my wife, happy.
So, is Michael Phelps the greatest Olympic athlete of all time? London Olympic chief Sebastian Coe says no. So what. It really only matters what Phelps believes about himself. So, what about you? I truly believe you are the greatest at whatever you choose. Make your choices to be your best each and every day and then do what you know you need to do. When you choose to have the dedication, drive, and determination, then you’re there and you have it. Go full with confidence and be courageous!