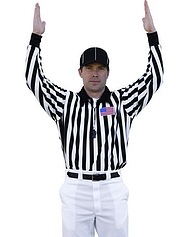 From now on, I want you to call me by my new title: Ref (short for referee). That’s right; I’m going to start calling the balls and strikes, and then count you out. I alone will determine when you’re out of bounds or your time has run out. If, in my opinion, you fail to run fast enough or fail to run in the allotted time or within the prescribed boundaries, you’ll be out. I’ll decide when you’re up, if it’s still your turn or if you should sit out a few rounds. Whatever I say, goes; you must accept whatever I rule.

Trust me; it will be much easier this way. I’m taking all of the decision-making out of your hands and, in return, no one will blame you if you never hit another home run or score anything, anywhere. So, don’t trouble yourself with ideas about where you want to go or what you want to do with the rest of your life – I’ll let you know because I know what you’re good at and what you stink at. Don’t worry your pretty little head about such mundane things as success or goals, or whether or not you’re doing the right thing with your life because I’m the one making the calls here. And, for Pete’s sake, don’t try to “learn” from your past in order to “prepare” for the future – you can’t see the “big picture” like I can. You just leave all of that scary stuff to me, the Ref.

If this sounds silly to you, congratulations! You recognize that no one can tell you if you’ve got another at-bat or if you’re out of the game unless you allow them – no one but you. Oh, and maybe God, but then I’m pretty sure if God says you’re out it means you’re dead!

If, on the other hand, you’ve got arguments and/or excuses proving there really are times when life hands you crap and that’s just the way life is sometimes, then congratulations to you too. No amount of positive instruction about goal-setting or guidance in structuring and recognizing your successful accomplishments will convince you that you’re in charge of your own decisions. But, who cares? So, congratulations . . . you don’t get a vote in your own life and you don’t matter.

That’s exactly how absurd it is when you say something like “I can’t sell widgets in this economy; people just won’t buy right now” or “this is the wrong time of year for widgets” or, one of my favorites, “I’m really good at this, but my team is bringing me down.” But, like the Ref said, it’s not your fault!

Your time here on this planet is what you make it. Your success at work or at home or in your relationships is only what you make it. Life is not a football game; you’ve got as many downs as you need or want, it’s your decision. Your work environment is not a baseball game – if you strike out one, two or even three times, you get up and try it again until you get it right. It’s your decision to succeed or quit. Comprende?

And here’s another thing. Have you ever watched a football game and noticed how safe the offense plays at the beginning of the game? The offense gets four chances (downs) to move the ball ten yards. If they don’t make the ten yards in three downs, and in order to avoid turning the ball over on downs, they will kick on the fourth down hoping to get the ball back later and try again to score.

We don’t have a limited number of quarters or downs at work or in life; but, what if we did and what if you played to win in every quarter like it was fourth down with two minutes to play and you were behind? Many companies and/or teams focus their attention on attaining certain targets early in a period. Everybody is fresh and eager at the beginning of a promotion. However, as deadlines approach (the dreaded fourth quarter) many team leaders will switch to survival mode by pulling back resources and playing it safe so as not to lose – they kick the ball assuming they won’t get the needed yards.

Leaders in outperforming teams will actually take greater risk in every quarter and be more likely to experiment by changing up the plays or re-arranging key players or whatever it takes. The leaders and teams who win are the ones who “go for it” no matter what the risk – they run the play and pick up yards or keep swinging until they make it to first base.

Whatever you decide – how many at-bats you have, if you’re running fast enough to win, or whether you want to win at all – at least have the courage to make your own decisions about your own life. When you start making excuses or playing it safe, you hand over the whistle and allow someone else to be your ref. It’s your decision.

Now, I need something from you. I get the feeling that all of you are just sitting there in front of your computer asking me to feed you advice. Hey, this is my life’s work and I’m happy to give you whatever I’ve got and to work with you one-on-one anywhere, anytime. But, come on folks; give me something back. I want to hear from you. I want you to tell me what’s happening where you work and live – what’s working for you and what’s not working. I want you to give me feedback. So, don’t just sit there like a bump on a log, tap out a response in my blog. Are you the one who jumps at the chance to run for extra yards, or would you rather kick the ball and hope for something better if time permits. I want to know what you did and how you did it when you decided to go for it!

n Twitter, FaceBook, blogs, grapevine. Of these four choices, which do you think has the potential to provide tremendous growth in leads? If you said Twitter, FaceBook and blogs, you’re right. And, for the record, I don’t care how many “friends” I accumulate on FaceBook, or how many Tweets follow me, they’ll never compare with…

Walking the Plank See, life is a wonderful adventure. And people who make the most of it-who have the most fun and get the most out of living-are those who have a high self-image. Their comfort zones make it possible for them to do just about anything. They may be a little less certain, like…

You know, Buckminster Fuller, a great philosopher, says that we’ve all been born with a genius mind and we spend our whole lives learning how to be un-geniuses. And it’s all because of our filtering system. We don’t just accept the evidence of what we’re capable of doing. We filter out the things that we’re…

Years ago, I was out on the golf course with Laddy, one of my Yodas, when he asked me: “What’s your shelf life?” TweetShareShare