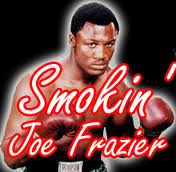 Have you ever met someone you thought was bigger than life? Maybe it was a movie star, a sports celebrity, or someone you had always idolized as a kid. Sometimes we put celebrities and heroes up on pedestals and treat them differently. And then, when we meet them, we find out that they’re just as normal as you and me. But, once in a while if you’re lucky, you get the chance to meet a real superman. How will you know? They will actually make you feel like you’re the celebrity! That’s what it was like when I met Joe Frazier.

I first met Mr. Frazier in the 1970s in Seattle, Washington. I expected him to be aloof, distant, and full of himself – after all, he was one of the greatest boxers of all time. Frazier was none of those things.

First, a little background. In the mid-70s, I had started a boxing company called World Promotions. We put on three fights at the Seattle Center Arena. Our company gave Pinklon Thomas his first three professional fights. (Pinklon went on to beat Tim Witherspoon in 1984 and become the World Boxing Council’s heavyweight champion.)

Joe Frazier was in Seattle for other business when I called him and asked if he would help promote our events. He didn’t even ask who was fighting, he just said meet me at my hotel and tell me what you want me to do. When I walked into the hotel lobby, Joe was surrounded by his team of handlers. I introduced myself and he greeted me like I was an old friend.

After we shook hands, Joe said he wanted to walk while we talked. And, this part I’ll never forget: his team started to walk with us – you know, to take care of any needs he might have. He turned to them and said stay, this is about Jim and me. We walked for about an hour talking about sports and life. At the end of our walk, he asked me what I wanted him to do. Just like that. He gave me radio time and pictures with the local newspaper. I know without a doubt his involvement made a big difference to the attendance at our events. Thereafter, I followed him as much as I could like any other fan, through articles and on television.

About 20 years later I was playing golf at the Heisman Trophy Annual Golf Tournament in New York. Every Heisman Trophy winner who was alive and could make it was there. The main event speaker was Joe Frazier. Joe arrived after the golf tournament in a black stretch limo. There must have been 50 people waiting to talk to him including TV announcers and many of the Heisman winners. When Joe got out of his limo everyone applauded the champ. I was in the back of crowd. I was just hoping to make eye contact and hoped he would remember me.

Joe wasn’t out of the car more than two minutes when he saw me and headed straight for me. He walked right by the various sports figures and announcers. He held out his hand and called out my name, “Hey, Jim Jackson.” It truly felt like we were old friends, and I believe he felt it too. We sat and talk for more than a half-hour without one interruption. It was the second time Joe Frazier had made me feel like I was the celebrity.

Today is sad yet a special day. Today Joe Frazier, a famous man who was also a legendary boxer, died of liver cancer. A legend, a great champion, and a good friend has passed on. Joe made our time together bigger than life. Good night, Smokin’ Joe.