n I was walking on the famous Michigan Avenue in Chicago last week when I noticed a long line of people. There must have been easily 40 or 50 people in a line stretching down the block. My first thought was that it must be some type of free giveaway or maybe it was a truly great restaurant. I stood there staring, trying to solve the mystery of why so many people would stand in a slow-moving line. It was intriguing and perplexing.n

I turned and observed a gentleman standing next to me who I thought might be trying to answer the very same riddle. So, I asked him if he knew why so many people were waiting in such a slow-moving line. “What do you think is going on?” I asked.

I was walking on the famous Michigann

Avenue in Chicago last week when I noticed a long line of people. There must have been easily 40 or 50 people in a line stretching down the block. My first thought was that it must be some type of free giveaway or maybe it was a truly great restaurant. I stood there staring, trying to solve the mystery of why so many people would stand in a slow-moving line. It was intriguing and perplexing.n

I turned and observed a gentleman standing next to me who I thought might be trying to answer the very same riddle. So, I asked him if he knew why so many people were waiting in such a slow-moving line. “What do you think is going on?” I asked.

To say that his answer was a surprise is an understatement. He informed me that all of those people were waiting in line for popcorn. Not free popcorn. They were in line for a popcorn store. I should tell you right now that I love popcorn. I love everything about it: the sound it makes when it pops, the aroma as it permeates the entire house (or movie theater), and especially the taste. There is nothing better than fluffy, hot-buttered popcorn. I can leave the table after a four-course dinner and then sit down with a bowl of popcorn. In fact, I see nothing wrong with having popcorn for dinner once in a while. But, waiting in a long line for well over a half-hour for popcorn, are you kidding me? I draw the line at waiting in line for popcorn.

The gentleman went on to say that his wife and daughter were also in that line. Then he quietly informed me that the popcorn everyone was waiting for was, in fact, the best popcorn in the world. Are you kidding me? Imagine that: I was standing across the street from the best popcorn in the world! I was skeptical, but already I knew I was getting in that line. As the gentleman walked away he said, “get the Chicago Mix – trust me, it’s the best.”

So, after I waited and watched for a few minutes to see if the line was moving or if I knew anyone in line, I headed over to Garrett Popcorn for the world famous “Chicago Mix.” It had not been my intent to stand in a long line or to buy popcorn when I started out that morning, and I seldom buy into propaganda; but, there I was, at the end of very long line waiting for the alleged world’s best popcorn. I was standing shoulder-to-shoulder, front-to-back with a very excited, yet well-mannered group of people all willing to wait for popcorn. Are you kidding me?

There was a buzz up and down the line about what each person was going to buy when it was finally their turn. From what I could hear, most everyone was getting the Chicago Mix. Directly in front of me was a giant of a man who I am sure played football for the Chicago Bears. He was six foot eight and had to weigh 350 to 400 pounds – not the kind of guy you take cuts in front of. I decided to make friends with him instead. “What are you getting?” I asked him. He told me he was going to buy the Chicago Mix. I had to find out what was in this famous Chicago Mix I kept hearing about. Very calmly he explained it is a combination of caramel corn and cheese popcorn that is out of this world. I didn’t think that sounded very good and told him so. I told him I would probably just purchase butter popcorn, after all I am sort of a connoisseur when it comes to popcorn, especially butter popcorn. He looked me in the eye and without any reservation said, “Get the Chicago Mix. It is all you will want to buy. Believe me.” You know, I said I think I might try the Chicago Mix.

It was time for the giant to place his order and all he ordered was a small bag of Chicago Mix. And he even said please. I asked myself: If this stuff was so great, how come he didn’t order a larger size? It was finally my turn to order. I’m not the shy type and so let everyone know that I was knowledgeable about popcorn and ordered a big bag of the Chicago Mix. By the way, it was definitely not cheap.

I took my large expensive bag of popcorn and headed back to my hotel to watch the World Cup. On the train back everyone kept eyeing my bag with the logo of Garrett Popcorn. Finally, back at my hotel room, I turned on the TV to watch the game. The game was already half over, but I was into this now. I kicked off my shoes, arranged all the pillows on the bed, got the remote, got my large bag of the world’s best popcorn, and got comfortable on the bed to partake in what has been a huge build-up to this world famous Chicago Mix. 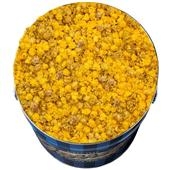 I try just a few kernels at first. This is unbelievable! I take a handful. Another handful. This is the most fantastic stuff I have ever tasted. It melts in my month and I am eating it as fast as I can only to stop after a few more handfuls as it is so rich and good. I have never tasted popcorn so good in my life. I can’t wait to bring the rest home for my wife, Mary, to try. The next day in the airport, I notice several people with bags of Garrett Popcorn – the greatest popcorn in the world.

Why am I telling you this story? Because people were willing to stand in a long line and pay good money for a small bag of popcorn. Think about that for a minute. Popcorn is a rather mundane, ordinary commodity, which anyone can buy for around 89¢ a pound (un-popped, of course). Those people (including me) waited in line to pay far more than 89¢ a pound for popcorn. It sounds amazing and far-fetched, unless you’ve been lucky enough to have your own bag of the Chicago Mix.

What is your business creating that people would be willing to stand in line to try? Are you creating a ‘wow’ experience, something that will make people remember you and get them talking about your business to others? How can you achieve a level of business excellence that will keep people coming back?

People may stand in line for you once, but they won’t do it twice unless you make it exciting or at least worth their time and money…

n n n n Jim Jackson to Keynoten Innovate 2010 – Annual Autostar Users’ Conference for Automotive Dealers. October 24-27, 2010.n n Jim Jackson is an executive coach, professional trainer, and nationally recognized author. He has been inspiring automotive dealers as well as many other audiences for more than 25 years. You can learn more…

What are you passionate about? What means the most to you? What drives you? What inspires you? What gives you energy? Your vision should be fueled by those passions. Don’t settle for a vision that seems like a good idea or sounds like the kind of thing you’re supposed to want to do. Pick it…

What a great summer of learning. I just got back from New York where I attended the National Speakers Association Annual Convention. Each year this is my time to hang out with and learn from the best of the best in my profession. This year, I got to hang out with Kevin Cronin, the lead…

n Customer Service Equals Revenuen All work is part of a process. In businesses the intent to generate revenue is the process of delivering a product or service that a customer is willing to trade real dollars to acquire. Your customer service processes and the people who deliver them are the only real differentiator that…