Just last summer 33 men became trapped in a mine cave-in some 2,050 feet below the surface. Thirty-three Chilean miners went to work that day in August of 2010, and had no idea how much their life could change or how much each one of them would be physically, emotionally or psychologically challenged. Sixty-nine days later, as the miners were being rescued one by one out of the earth, a story emerged about one particular miner: Luis Albert Urzua.

The whole world watched the amazing rescue and when we learned about Luis Albert Urzua, we all anxiously waited for him to be hoisted to daylight. The very last miner to be raised out of the black shaft was the foreman Luis Albert Urzua — he would not ascend to top until all 32 men on his team had been saved. He and his men had been delivered from the longest underground entrapment in history. Luis Alberto Urzua and his men were delivered to safety in a joyous climax to a flawless rescue that captivated the world.

The rescued miners told reporters that after the cave-in, Luis rallied the group together and kept everyone calm. Without really knowing how much time had elapsed, Luis took charge of the frightened group of men giving them assurance and hope. It took the rescuers 17 days to make initial contact with the buried men; but it must have seemed like an eternity to the men. During those first 17 days and thereafter, Luis planned for their survival by rationing food, conserving the batteries in their helmet lights, and designating areas for other physical needs. In other words, when the world literally caved in around him and became dark, he didn’t give up.

You might expect the foreman or captain of a team to take charge. But for Luis it was more than that. A man who lives near Luis’ home remarked that Luis is the type of man who keeps everybody’s spirits up and is very responsible; a man with exceptional leadership traits, who could always see through the most difficult times.

The rescue team could only pull one man at a time to safety. Luis was determined to make sure that his fellow miners were safe and sound above ground before he left the temporary tomb. So, when Luis was the last miner to be pulled to fresh air, the crowd erupted with cheers and tears of joy. Luis stepped from the rescue capsule and embraced his son, then accepted the thanks and congratulations from the Chilean president. Luis had emerged from the nightmare as a true hero.

How would you have reacted to such a catastrophe? I’m not sure any of us can fully appreciate being buried alive, but could you be the leader? Could you follow someone else’s leadership? Luis took charge by enduring the darkness and believing they would be rescued. He didn’t deny the crisis; he managed it and made it work for him and his men until they could be saved. How do your leadership traits hold up under pressure?

I’m not saying you or I will ever suffer something as horrifying as being trapped in a mine; but maybe we all have our “mines” that we sometimes feel trapped in. There are people around you right now who are waiting for you to show them and give them hope. Don’t ever stop having, showing, and giving hope. Be the one who makes a difference.

Welcome to 2011. This year will require the kind of leadership skills that only a few will be willing to invest in. Most people who call themselves leaders are really just managers who happen to be the highest ranking person – a leader by default. But, if you really want to be the leader, you’ve… 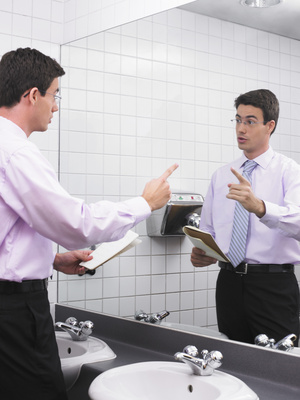 n n I was in Baltimore, Maryland last month working with a client, when he asked me why he couldn’t get at least 90 percent performance from his people. I asked him why he would allow only 90 percent to be good enough to take care of his customers, his most valuable asset. The look…